The spirit of the way 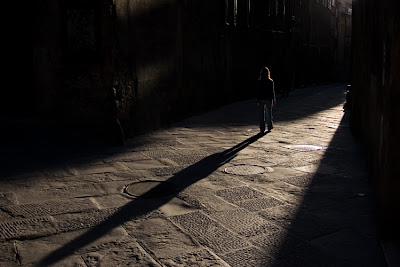 About a year ago a friend in England sent me some CDs.  He'd done so before, and usually they contained music by obscure UK bands from the 60s and 70s.  This time, though, they contained lectures by Alan Watts, like Aldous Huxley (and Mr. Propter) a Californian Buddhist who was also a transplanted Englishman.

Watts is often called a philosopher, although he had no formal academic training in that field.  He was educated at the King's School, Canterbury, at the heart-centre of Anglican Christianity.  After moving to the US, he qualified as an Episcopalian priest, only to renounce his vocation a few years later.  He moved to California, ending up in a circular house in an artists' colony in Marin County.

He is perhaps best described as a free-lance writer, and he is best remembered for his books about Zen.  Watts' 1957 book The Way of Zen was one of the first widely read books on Buddhism in a Western language.  I meant to read it, but its title is so similar to that of Watts' first book, The Spirit of Zen (1936) that I read the earlier work instead.  (I've since noticed a good, cheap edition of the later book on sale at my local bookstore.)

One of the things that strikes me whenever I read Western books about Buddhism from the pre-war era is how rare they were.  Their writers seem to be working in a vacuum of accurate knowledge about Eastern religions.  In his Foreword, Watts states that before the First World War there was 'only one work on Zen in any European language - Kaiten Nukariya's Religion of the Samurai'.  He also claims that his bibliography - which runs to little more than two pages - is an exhaustive list of the books on Zen that had appeared up to the date his book was published.

Watts is therefore reliant on a few personal channels between Buddhism and the West.  One is Christmas Humphreys, the English barrister who founded the Buddhist Society of London and who is the dedicand of Watts' book.  Another is D.T. Suzuki - not to be confused with SF Zen Center founder Shunryu - whose many books for Western audiences Watts credits for a growing interest in Buddhism among Americans.

Since I read Suzuki's Introduction to Zen Buddhism only a year ago, his influence on Watts was quite clear to me.  Like Suzuki, Watts moves from a vague yet appealing characterization of Zen in purely psychological and mystical terms to a concrete description of practice in a Japanese monastery.  Like Suzuki, Watts never faces up to the obvious question: if Zen is a way of thinking free of limitations, why are there all these strict practices?

A third theme of the book is Zen as a key into the cultures of China and Japan; indeed, the book is subtitled A Way of Life, Work and Art in the Far East.  This theme is treated mostly in the final chapter, which is the weakest part of the book, or at least the part that feels the most dated.  Watts moves from Zen and samurai through jujitsu and flower-arrangement, all the while avoiding asking how common (let alone representative) such practices are in the China and Japan of his day.

In spite of its limitations, though, the book is a valuable one.  Watts has an intuitive understanding of religious phenomena and writes in a way that is both unpretentious and engaging.  The book is not for scholars, but may be for practitioners.  It is full of passages that perfectly encapsulate the essence of some of the central ideas in Buddhism.  Let's end with Watts' lucid description of karma:

'A man may be free to travel where he likes, but there is no place on earth where he can escape from his own karma, and whether he lives on a mountain or in a city he may still be the victim of an uncontrolled mind.  For man's karma travels with him, like his shadow.  Indeed, it is his shadow, for it has been said, "Man stands in his own shadow and wonders why it is dark."'

Mr. Propter
Mr. Propter was born in the cold and barren north and raised in green and pleasant lands. He lives in the city and studies in the south bay, where he works on instigating radical democratic change by conducting ancient historical research.